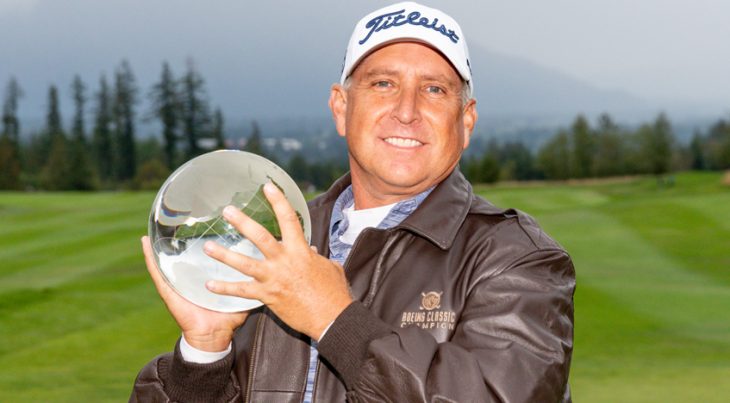 SNOQUALMIE, Wash. (AP) — Scott Parel won the Boeing Classic on Sunday for his first PGA Tour Champions title, birdieing the final six holes on the front nine in a 9-under 63.

Five strokes behind Kevin Sutherland and Ken Tanigawa entering the round, Parel beat Sutherland by three strokes at The Club at Snoqualmie Ridge.

“I don’t know if I necessarily knew it was going to happen, but I felt like I was playing well enough for it to happen,” Parel said. “I just put it all together today.”

“I’ve been dreaming about it since I got out here,” Parel said. “It means I get to take my wife to Hawaii. I know that she’s been wanting to do that. It hasn’t sunk in yet. It’s a blessing just to be able to play out here and now know that I’ll be able to play next year. That’s always been my goal in the position that I’m in is to play well enough to where I’m going to have status every year.”

Sutherland had a 71 — birdieing the par-5 18th after opening with 17 straight pars — a day shooting a course-record 60. In the 2014 Dick’s Sporting Goods Open, Sutherland shot a tour-record 59 in the second round, then closed with a 74 to tie for seventh.

“I’m disappointed I didn’t play better today,” Sutherland said. “I don’t feel like I played badly. I had like one birdie and 17 pars, completely the opposite of yesterday’s round. I didn’t hit the ball as close to the hole, and when I did, I didn’t convert them very often until the last hole.”

Parel finished at 18-under 198. He was tied for the first-round lead after a 65, then dropped back Saturday with a 70.

“I’ve always driven the ball pretty well and hit it pretty well, but you’ve got to make putts on this tour to win. My putting has been more and more consistent, even starting last year. So, I think I putted really well today and all weekend really.”

His only previous victory in a PGA Tour-sanctioned event came in the Web.com Tour’s 2013 Air Capital Classic. From Augusta, Georgia, he worked as a computer programmer and database administrator for 10 years following college and didn’t turn pro until he was 31.

Tanigawa followed his second-round 64 with a 73 to tie for third at 3 under with Miguel Angel Jimenez (67).

Hometown star Fred Couples finished with a 65 to tie for 15th at 8 under.

“All in all, I really enjoyed my week,” Clarke said. “I think the most surprising thing was I think the public perception. People tend to imagine they play the courses a little bit shorter than they actually do, and the courses aren’t that short and the greens run to 12 on the stimpmeter. It’s a test, but the guys just flat out go for it.”

Posted in Local Golf
“Putting them out, since 1949”